Although we’re currently living in the era of digital diversity where social media platforms are evolving to serve their customers better every day, not many platforms have adopted diversity as well as WhatsApp did.

While WhatsApp was rolled out as an instant messaging platform focused on smartphone users 13 years ago, today, it does much more than that. First, there was the incorporation of voice and video calls on the platform to enable smoother communication between the users. Then, its scope was widened by adding the group video call feature.

Next, the end-to-end encrypted messages feature was rolled out to protect the privacy of user data. Thereafter came the concept of adding status updates with a validity of 24 hours; a feature that traveled across platforms from Snapchat to Instagram, Facebook, and finally, WhatsApp.

The Stories feature was followed by disappearing messages, disappearing pictures, and lastly, the choice of deleting a particular message for both parties. Later, WhatsApp also added its own UPI payment option for users to make money transactions on the platform itself. Not to mention the release of WhatsApp’s own web app for desktop users: WhatsApp Web.

And these are just a handful of the major changes that have been introduced to the platform in its lifetime, such is the diversity of WhatsApp. At this rate of growth, we wouldn’t be surprised to see WhatsApp as one of the super-apps in the coming years. In today’s blog, we’re going to discuss one such recent update on WhatsApp and the possibilities of error in it. The feature we’ll talk about is: reactions on WhatsApp. If you have any questions or doubts related to this brand-new feature on one of WhatsApp’s latest rollouts, stick with us till the end to have them answered.

Contents hide
How to Fix WhatsApp Reactions Not Working
1. Try restarting your device first
2. When did you last update WhatsApp?

So far, we’ve told you everything that you needed to know about WhatsApp reactions, except one thing: despite the feature going global on May 5th, 2022, some users have been complaining about not having it on their app yet.

Are you one of these users who are still waiting to explore the WhatsApp reactions feature? While such a thing is not a common occurrence, we understand that it could happen at times and are here to help you find your way out of this fix. And how will we achieve that? By exploring all possibilities of it not working on your device. Let’s get started, shall we?

Whenever you face any minor glitch or error on your smartphone, what’s the first thought that crosses your mind? Let’s try turning the phone off and then back again?

Don’t worry; you’re not alone in thinking so. A majority of smartphone users, regardless of their academic backgrounds, believe in this strategy, and for a good reason as well. Experts say that all smartphones should be restarted at least once a week. This not only helps your device function smoothly and prevents it from crashing but can also prolong its life!

There’s another benefit of restarting your device that’s relevant to the matter at hand. When you close an app from your app grid, it’s not really close but goes into an intermediate resting state. Therefore, restarting your phone gives the apps an opportunity to really shut down and reboot.

So, if you’re facing the issue of WhatsApp reactions not working, restarting your smartphone should be your first order of business. If it works, you can thank us later; alternatively, if the problem is still not fixed, keep reading to explore other possibilities.

2. When did you last update WhatsApp?

Most smartphone users with a stable internet (WiFi) connection today keep auto-update enabled on their smartphones and desktops. But if you’re not a part of this crowd and do such things manually, you need to open your Google Play Store (if you use an Android smartphone) or App Store (if you use an iOS smartphone), search for WhatsApp, and see if you can find the option of updating it there.

This rule also applies to every user who hasn’t updated their apps after May 5th. Since reactions were a part of this particular update, they might not appear on your app if it hasn’t been updated. 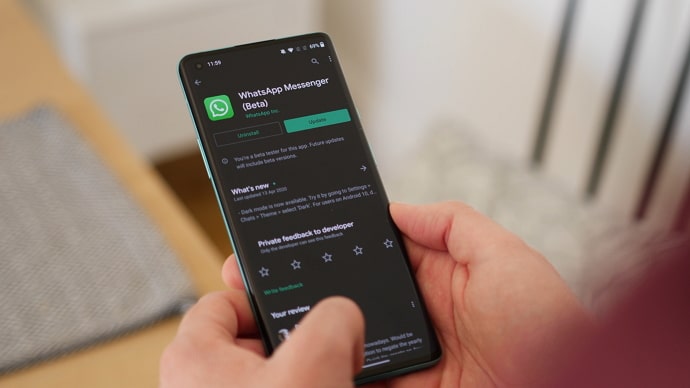