Fortnite Battle Royale became one of the successful smartphone games within a year. It didn’t take this game a long time to catch the attention of 125 million Android players.

Yes, that’s true! Fortnite Royale Battle has received so much popularity and downloads after getting launched.  Ever since the game released in the online gaming app markets, it rose to popularity. The amazing graphics, sophisticated features, and a wonderful theme helped the developer to achieve overnight success from this popular game.

While most Android users have already downloaded and started playing the Fortnite Battle Royale, others find it challenging to run this game on their unsupported device.

If you are unable to play this epic game on your smartphone, you have come to the right place! In this post, we’ll walk you through the step-by-step guide to installing the Fortnite Battle Royale on an unsupported android phone. Let’s get started.

You can download Fortnite Battle Royale from the Fortnite installer. However, if the error “Device Not Supported” pops up on your screen, then your mobile’s hardware isn’t compatible with the game’s graphics or functionality.

If your device’s hardware is not compatible with the game, then you will come across the device not supported error. The Fortnite Battle Royale can be played on the Android devices that meet the following eligibility criteria:

The game is released for Samsung Galaxy users. If you have been using any Samsung Galaxy model, you can hit the Galaxy store and install the game application from there.

For other android smartphones, you need to follow the below-listed steps to play fortnite on incompatible android device.

Step 1: Download the Fortnite Battle Royal app on incompatible android device from below.

Step 2: Install the game on your unsupported Android phone and launch the game.

Step 3: If the game starts on your device, start playing. If it doesn’t support your Android phone, you will receive an error “Device does not have a compatible GPU”. You can either quit the app or tap more info option to know more about the issue.

Step 4: After that download and install APK Editor Pro and start it on your android phone.

Step 5: Press the “Select APK” option from the application and pick the Fortnite Battle Royale App from the installed mobile apps. Press the Full Edit button. Step 7: As soon as the procedure finishes, start the Smali, then com, epicgames, Ue4, and choose the GameActivity.smali.

Step 8: From the search, locate “ProcessSystemInfo” and write the following:

You will need to write this just below the “.register32”. 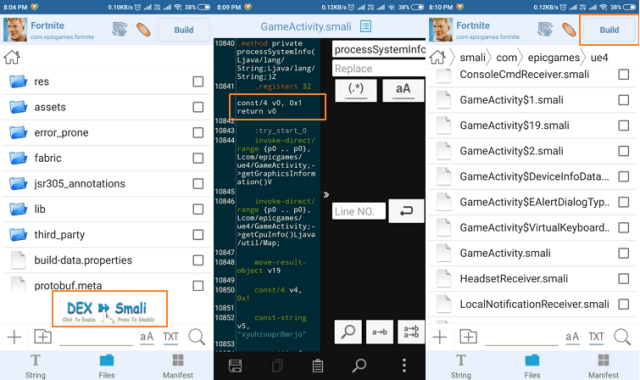 Step 9: This process will build the APK. As the process completes, uninstall the older Fortnite version and install the game again.